Often times when people think about 3D printers, they think about figurines, hobbyist parts, and small, plastic prototypes. But 3D printing has come a long way since it’s introduction in the 1980’s. Unfortunately, many people still have various misconceptions about the technology and the materials that can be used to achieve much more for companies who purchase a 3D printer built for manufacturing floors.

When people are misinformed about new technology, they often shy away from it or use it incorrectly. It’s important to get all the correct information before using a 3D printer to ensure you get the best use out of it.

Here are four of the most common misconceptions about 3D printers and their materials:

1. Plastic 3D printing materials are too weak to be used in a manufacturing environment

Before 3D printers built for manufacturing were introduced, many 3D printers used printing plastics unsuitable for a manufacturing environment. Those printers not only make weaker parts, but the parts are also not durable enough or chemically resistant. In the last five years, 3D printer manufacturers have created machines capable of printing more robust materials. The addition of composites such as continuous carbon fiber has introduced the ability for customers to print parts that, when reinforced with continuous carbon fiber, are as strong as 6061 aluminum.

Some manufacturing-grade printers are expensive — however you can find a 3D printer for manufacturing purposes for as cheap as $3,500. Printers that cost over $100,000 are usually large format printers, which frequently require special facility requirements and safety equipment. 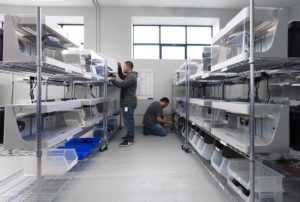 3. 3D printers are difficult to operate

In the past, 3D printers were difficult to operate. Many current 3D printers for manufacturing purposes often have unintuitive software that requires expert knowledge, while early generations of hobby-level 3D printers were built without software. As a result, these machines require considerable operator expertise — including part design, part orientation, and machine settings — to yield a viable part. 3D printer companies now produce integrated purpose-built hardware, software, and materials, which results in predictable machine performance, with less need for operator expertise. This means engineers and machinists can focus more on designing quality parts and less time focusing on figuring out how to best use the software and printer.

3D printers are able to create parts cheaper and faster for custom low-volume parts. Businesses are able to focus on revenue-making end use parts, instead of putting too much time, effort, and money on low-volume parts that may not generate any revenue for the business. With a 3D printer, you can rapidly iterate designs without wasting resources waiting for parts that may not meet quality standards. This makes 3D printers perfect for low-volume, custom-made prototypes, tooling, and fixtures that are often complex and hard to machine, but are critical for an efficient production process.

Want to test the strength of our printers? Request a free Markforged sample part here. Have questions about how a Markforged 3D printer can help your company achieve its goals? Click here and one of our experts from The SolidExperts will be happy to help you.