Markforged: 5 Years and Beyond 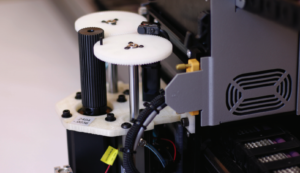 In July of 2018, Markforged celebrated five years since a handful of people in a garage designed the first carbon fiber 3D printer. The team at Markforged is grateful to their customers for contributing to their success and believing in them over the last five years. Here’s the story of how Markforged began, the early adopters who believed in the company, and how their customers made it possible for them to continue down the path of innovation.

In January 2014, Markforged debuted the world’s first 3D printer capable of printing in continuous carbon fiber at SOLIDWORKS World: The Mark One. Autometrix believed in the concept and bought one of the first Markforged printers.

Autometrix provides cutting equipment and patterning software to a variety of industrial applications, used for anything from transportation to medical devices. The company wanted to bring prototyping in-house, but engineers “needed to make sure that the results of the prototyping process were real to what [they] were trying to design,” according to Tyler Green, Electrical Engineer at Autometrix. After realizing the team could 3D print a fiber reinforced part that actually worked on their cutter head, the team was sold on the Mark One.

That was just the beginning. Autometrix then printed an entire cutting head using the Mark One, and engineers discovered that the printed cutting head weighed half a pound less than its aluminum counterpart. The lightweight parts made on the Mark One held up to all the impact their metal counterparts do and more, allowing Green and other engineers at Autometrix to improve and expand their mechanical systems.

The Mark Two – the next generation of the Mark One – was launched in February 2016. The Mark Two featured an entirely redesigned composite printing system that enabled higher strength and higher quality parts than its predecessor. Fittings and valves manufacturer Dixon Valve needed a printer that could create high-strength parts, making the Mark Two a great potential fit for the company.

The company knew it needed a 3D printer for customizable parts, which led its engineers to the Mark Two.  “With the Mark Two, we were able to re-tool a robotic arm in a manufacturing cell in under 24 hours,” Everett exclaimed. The Mark Two enabled Dixon Valve to produce new manufacturing solutions at unprecedented speed and cost, providing the company with a powerful new tool in its toolbox. Everett feels that the Mark Two is a critical component in the company’s design process, saying “it is really changing the way we work to the point where we are actually altering our procedures and plans to accommodate this groundbreaking product.”

The Introduction of Onyx

In 2016, Markforged launched Onyx, the next-generation composite reinforced thermoplastic uniquely suited for manufacturing environments. As Onyx has very high thermal stability, it is not prone to warping. It has superior strength and stiffness, and is a high-precision, high-repeatability material. It was this high precision that first attracted MARTAC to printing in Onyx.

MARTAC (Maritime Tactical Systems) designs and manufactures high-performance unmanned aquatic vessels. The company was looking to create geometrically complex intakes that could help route seawater through cooling channels. By 3D printing this part in Onyx, MARTAC was able to create a complex, custom geometry that didn’t need to conform to subtractive machining constraints.

With nearly three times the build volume and an advanced self-monitoring sensor suite, the X7 was Markforged’s first industrial format 3D printer. Humanetics — the world’s leading supplier of crash test dummies — was in need of a new technology to speed up its process around replacing large parts. The X7 was the perfect solution for them.

Humanetics’ crash test dummies are used in the automotive, military, and aerospace industries. Faced with the issue of molds wearing out too quickly, Humanetics was searching for a cost-effective way to make long-lasting parts that would withstand high temperatures. Humanetics has printed somewhere between five and ten molds, and plans to replace many of the company’s 150 molds with Markforged prints. In addition to the cost and durability benefits, the team at Humanetics found that printed molds yield better parts. Where silicone molds leave seams and other imperfections, the precise fit of printed molds result in a near-perfect part.

In the last year and a half, Markforged added metal 3D printing to their product line in the form of the Metal X. The ability to print stainless steel parts opens up new opportunities to print like-for-like replacements for a wide variety of product lines. Stanley Infrastructure, a division of Stanley Black & Decker, adopted the Metal X to investigate replacing expensive bespoke parts with cheap printed ones.  Since purchasing the printer, Stanley Infrastructure has focused on printing high-quality parts, which has minimized machining time and reduced costs.

Want to test the strength of our printers? Request a free Markforged sample part here.

Have questions about how Markforged printers can help your business grow while saving money?  Click here and an expert from The SolidExperts will be happy to help!