Lifecast Body Simulation (Lifecast BodySim) has created bodies that were so real, the film industry took it by storm to create realistic looking people.

From gory war scenes, to special effects, to all things supernatural, the team based in London’s Elstree Studios has worked on blockbuster hits and massive productions including Black Hawk Down, Saving Private Ryan, the Fast and Furious series, and many more. But after several years of supplying dead bodies for film productions, they were approached by two healthcare workers who had something else in mind: Medical training. 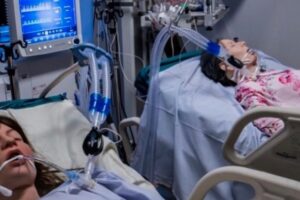 “Dave and Rob are two very renowned paramedics who have worked all over the world, and in war zones,” says Tristan Schoonraad, a British artist and sculptor known to most as Schoony. “They came to us and said, ‘We could really use these hyper realistic bodies to train on.’” Beyond his work with Life3d Studios, who provide molding, 3D scanning and printing solutions primarily in film, TV, and art, Schoony also operates as a director at Lifecast BodySim alongside his father John Schoonraad, co-founder and Creative Director.

Before the pandemic began, Lifecast BodySim was already involved in the industry. “We’ve been doing medical stuff for years,” John Schoonraad says. “Recently, there has been lots more interest in it – and we are the only people in our type of business.”

On March 23, just two weeks before the United Kingdom entered the lockdown phase of the Covid-19 pandemic, Lifecast BodySim donated five of their bodies, or manikins as they are known in medical terms, to NHS Nightingale Hospitals – critical care temporary hospitals set up as part of the UK’s response to Covid-19.

Initially, 2000 medical staff in the UK were trained on these manikins for Covid-19-related illnesses such as respiratory complications and breathing difficulty – this focused the training on working with respirators, ventilators, and incubators. 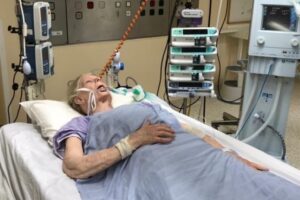 In emergency situations – and the chaos that Covid-19 has brought to medical facilities around the world – accuracy and precision is key. “You can do a lot of damage if you do any of these procedures wrong,” John Schoonraad says. “If you work on a silicon body, when you get to the real one it won’t be like the first time; you’ve already done it before.”

To ensure the bodies are hyper-realistic, the process of creating these manikins needs to be detailed and thorough. Especially for capturing and recreating the details of a human head, Artec Eva’s dedication to detail is essential.

A structured-light 3D scanner specializing in creating textured and accurate 3D models, Artec Eva is ideal for medium-sized objects such as a motorcycle exhaust system, construction equipment, or in this case, a human body. Safe to use on any surface including the human eye, Eva is quick, precise, and highly accurate.

For centuries, a process known as life-casting has been used to create 3D copies of living human bodies through molding and casting. Today, it is still commonly used in the movie and design industry, and includes techniques such as turning dry seaweed into a paste which is then applied to create a mold. Just a head would take 20 minutes to create a mold from, plus hours of preparation and a lot of work afterwards, Schoonraad estimates. In total, an entire body would take at least three hours from start to finish, compared to mere minutes with scanning.

While life-casting currently has the benefit of familiarity and allowing details to be captured in a mold made directly from the body – it skips the process of printing and sculpturing – the industry is very much moving towards 3D scanning, either in part or in full.

At Lifecast BodySim, life-casting is often used in tandem with Artec Eva – for example using Artec Eva for heads, and life-casting for the rest of the body – but using Eva has shown some clear advantages, especially when working with older people who may find the life-cast process itself difficult.

“When we scan people we get a much more realistic impression. Unlike life-casting, you can have their eyes open, for example,” says John Schoonraad. Another benefit of 3D scanning is that its speed allows rescans to capture the necessary facial expressions or body positions, in case you’re mid-way through a scan and think “Woah, I don’t like the look of that!” Schoonraad laughs.

“Being life-casted is not the most pleasing thing in the world, but the process of scanning is so quick, easy, and accurate,” he says. “With scanning, you just need to stand there with your arms out for a few minutes. And it can be done anywhere – hotels, studios. Scanning is the way to go.”

After a person has been scanned, the data is processed in Artec Studio and then printed. “We then take those prints, refine them in sculpture and produce a mold,” John Schoonraad says. During this stage, Monster clay (a malleable clay high in plasticity and with a unique elastic quality) is used, allowing more fine details such as wrinkles to be added. With this mold, silicon is used to create the hyper-realistic bodies.

One of the finishing touches to add the hyper in hyper-realistic is the use of real hair on the manikins. This part of the process is done by Gracie Schoonraad, a professional hairstylist and wife of Tristan Schoonraad.

“Once the bodies have been completely made, their hair – human and yak – is literally punched in,” says Gracie, who sews, crochets, or hooks in hair for heads, eyelashes, and eyebrows by the strand. “Creating something realistic is so difficult. As soon as you add hair, and actual hair, it’s what really creates something life-like.”

Want to find new ways 3D technology can help you? Contact an expert here from The SolidExperts.