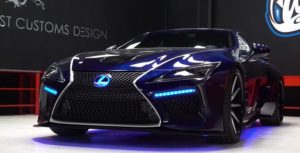 It was day one, and West Coast Customs’ master designer, Musa Tjahjono, needed a precise 3D model of the Lexus LC 500, down to the millimeter, because whenever he puts his “digital scalpel” to the screen and makes his first “incisions” to create Marvel’s Black Panther Lexus, he wants to know with pinpoint assurance that everything will be exactly where it should be.

So, he turned to their go-to handheld 3D scanner, Artec Eva, a professional color 3D scanner proven the world over for quickly capturing medium-to-large objects with up to .1mm accuracy. West Coast Customs has used their Eva for dozens of high-profile projects where accuracy and lifelike, error-free results are crucial.

And this particular project was an extremely important collaboration between Marvel, Lexus and West Coast Customs. Marvel contacted West Coast Customs about the plan to transform the Lexus LC 500 into a Black Panther-themed car that would astonish moviegoers east to west.

Together they created page after page of concept sketches, crystallizing their vision into one unified set of renderings. Taking the Lexus LC 500 from the stock model to the finished, iridescent blue Black Panther Lexus was a journey played out over the following nine months, with every facet of the 1 of 1 custom build meticulously brought to life and fine-tuned. Paint samples, interior variations, Black Panther theme elements, and more, all discussed one-by-one in ongoing meetings, with approvals from both Marvel and Lexus at every step prior to any additional work being done. 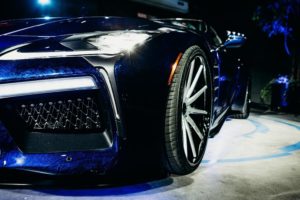 To create the 3D model of the Lexus LC 500, West Coast Customs’ machinist simply picked up their Artec Eva and walked around the car, moving the scanner up and down in large sweeps to capture every square inch of the exterior from a variety of angles. “It’s a huge help that Eva is lightweight and comfortable to hold, which makes scanning actually fun to do, even though because it’s capturing surfaces so fast you don’t need to use it for long before you look over at the laptop and realize that you’ve scanned the whole car,” said West Coast Customs’ VP of Sales, Lorenzo Strong.

Following the scanning, which took less than an hour, the scans were processed in Artec Studio, the robust scanning software that supports Eva and the entire family of Artec scanners. Studio gives you the power to align and register all your scans quickly and easily into a 3D model ready for export in a variety of formats. In the case of the Lexus LC 500, they exported the 3D model over to Geomagic Design X and SOLIDWORKS, which is where they began to work their digital magic and bring the renderings to reality. 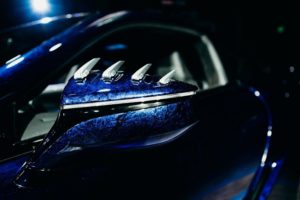 To illustrate one example of how Artec Eva helped with the transformation: the claws on the side view mirrors were made by first doing direct scans of the Black Panther’s movie gloves. “Once we scanned the gloves with Eva, we isolated the claws from the gloves and created 3D models of those, and then 3D printed them…and one of the final touches to the car was mounting those claws on the mirrors. For this step and quite a few others, it either would’ve been just impossible without Eva or much more difficult and definitely not as precise,” said Lorenzo Strong.

After West Coast Customs revealed the Black Panther Lexus to the public, the onyx blue powerhouse was sent on tour around the country, astounding fans from coast to coast. Today it can be found lurking in the Lexus Corporate Headquarters in Plano, Texas.

West Coast Customs recently began scanning with the Artec Leo, a revolutionary handheld 3D scanner that is fully wireless and features onboard processing and a built-in touch screen for interacting with your scans in real time. Giving you the power to digitally capture a wide variety of surfaces in complete darkness or bright sunlight, or anything between, Leo is a skyrocketing favorite in the fields of quality inspection, reverse engineering, automotive, CGI, healthcare, education, and many others.

West Coast Customs has big plans for Leo, because now with such extreme portability, they can easily take Leo offsite to a client’s location, or to a parking lot, or an auto show, and do their scanning right there. With Leo’s 44 fps capture rate and wide field of view, objects ranging in size from steering wheels and dashboards to fenders, and even entire cars are a breeze to scan. As well, with Leo’s intuitive UI and ease-of-use, now anyone in the shop or the office can do the scanning, not just the technicians.

Do you have questions about how Artec 3D scanners can help with your 3D models? Click here and an expert from The SolidExperts will be happy to help.