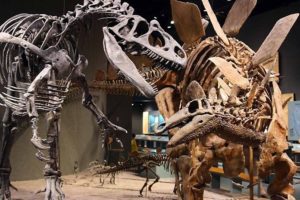 Dinosaurs have the ability to capture the imagination and fascination of most people, regardless of age.  Young children and senior citizens alike are often left with their mouths open as they visit the dinosaur exhibit at the Denver Museum of Nature & Science.

One of the most iconic scenes depicted at the exhibit has to be the Stegosaurus and Allosaurus facing off – and this particular 26-foot-long Stegosaurus just happens to represent the state of Colorado.  The Stegosaurus was a herbivorous dinosaur weighing up to 10 tons that inhabited the area now called Colorado 150 million years ago. What makes this particular Stegosaurus so special is not the fact that it was found in Cañon City, Colorado, or even that it was mostly complete, a very rare thing for dinosaur skeletons. It was found by a class of high school students on a fossil-hunting field trip in 1936, and the teacher of that class of students, Frederick Carl Kessler, was able to arrange for his students to work alongside professional paleontologists to excavate the fossil skeleton.

Enter Mike Triebold of Triebold Paleontology, Inc. (TPI) in Woodland Park, Colorado. TPI restores and mounts fossil skeletons and creates skeleton casts, supplying them to museums across the globe. The company’s clients include the American Museum of Natural History in New York, Carnegie Museum in Pittsburgh, and the Smithsonian Museum of Natural History in Washington, D.C. The TPI headquarters house a collection of casts and original fossil specimens, which are on exhibit at the company’s hands-on natural history museum, the Rocky Mountain Dinosaur Resource Center.

Mike Triebold was looking to add a Stegosaurus to his catalog of casts, but not just any Stegosaurus. He was focused on getting the famous Kessler Stegosaurus at the Denver Museum for the project if at all possible because the new Royal Gorge Dinosaur Experience in Canon City was being built and they wanted a copy of the Stegosaurus that was collected by Kessler near Canon City.  RGDE owner Zach Reynolds’ grandfather regularly accompanied Kessler on dinosaur digs from the 40s through the 60s, so the Stegosaurus has both family and community ties.

Discussions ensued and with the Denver Museum’s blessing, the work began.

Reproducing this specimen was complicated by a couple of factors. One is the size of the specimen. Not only is this dinosaur over 26 feet long, but with the tall plates lining its neck, back and tail, it is also over 9 feet tall. Normally the size would not be an insurmountable challenge as each individual bone would just be molded in silicone and cast from liquid plastics. This specimen is not just bones on shelves though. It was mounted and placed on exhibit in the 1990s using purely permanent means, so it was not built to ever be taken apart. Steel was shaped around the skeleton, welded in place, and permanently puttied to the bones, so molding the individual bones in silicone was rendered impossible.

To recreate this specimen TPI’s Matt Christopher needed to mold it using 3D scanning. “We needed to three-dimensionally digitize the skeleton that could not be dismantled so that a replica could be 3D printed,” says Matt. “The dimensions and surface details needed to be close enough to what we would get from a silicone mold so that we could hand-finish 3D prints to look exactly like the original specimen.”

Wondering if an Artec3D scanner could help you with your “huge” challenges?  Click here and an expert from The SolidExperts will be happy to help you.