Driving Electric Through the Outback with Artec Leo

The great country of Australia has a population of approximately 25 million people. Within that large population, around 85 percent of people live on Australia’s expansive coast which leaves a vast amount of terrain in the center. That extra space means an increase in capacity for thrilling adventures, such as taking an excursion through the outback, cruising along the beautiful coast, or simply admiring the wildlife.

With all the off-road driving options available through an island so big it is not just a country but a continent, an SUV seems an obvious choice for your big Aussie adventure; an old classic Land Rover looks more at home here than anything else. But with today’s fight against climate change and a push for environmentally friendly alternatives, the Land Rover has something major working against it: the large amount of diesel it consumes, and the emissions it produces.

“I’ve always loved exploring and hiking and four-wheel driving, and Australia is great for getting out into the bush,” said Dave Budge, CEO of Jaunt Motors. “But I felt a little guilty about burning a lot of diesel to go somewhere that has pristine air and beautiful surroundings. There’s a huge part of Australia – some of the most beautiful places there are – where there’s no way to get there other than a four-wheel drive.”

While a growing urgency on reducing carbon emissions looms, there were numerous reasons for developing a new way to explore the Australian bush. “You want to hear the birds and the wind – there’s an element you miss when you’re in a car because of the sound of a diesel engine,” Budge said. “And I just found myself wishing there was an electric four-wheel that I could buy.” 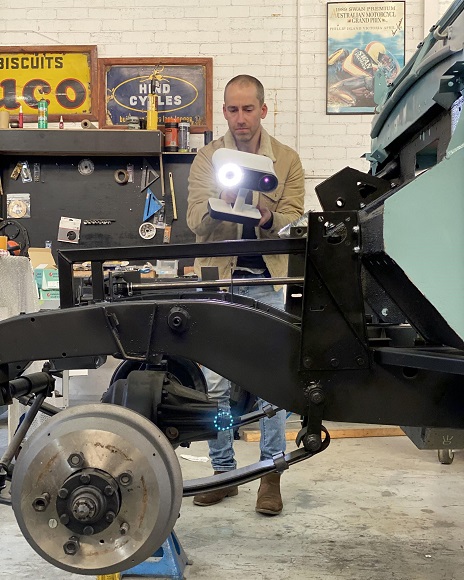 “Per capita, Australia has some of the worst transport emissions in the world, and it’s not just because we drive long distances – we have very inefficient, old cars, and laws don’t require regular checks for emissions that most other countries do,” Budge explained.

Teaming up with Jaunt co-founder Marteen Burger in 2018, the pair combined their expertise and talents – Budge as a designer and creative director, Burger as a producer and production manager – and started to form a plan.

“The time was right, people have been converting cars for 10-15 years,” said Budge. “We were at a point where it wasn’t an engineering challenge – we knew it could be done – it was more of a design and user interface challenge.” 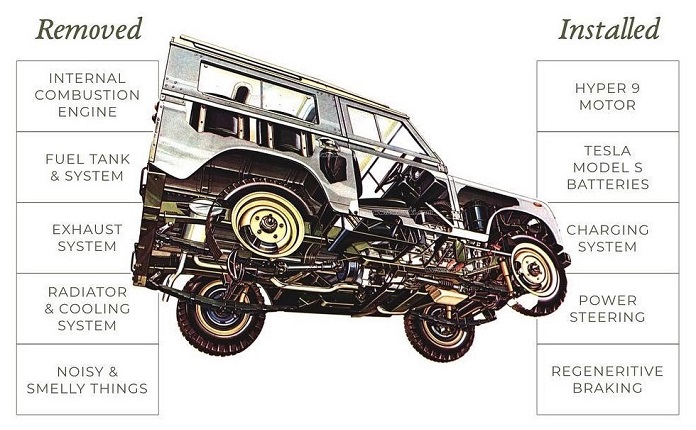 The first step was buying a car and pulling it apart. “No two Land Rovers are the same – they’re all hand built,” said Budge. But with a ladder frame that the car is built around staying consistent, the basic dimensions have stayed the same for most of the last 70 years. These dimensions allowed the team to better understand how to fit everything in with some parts removed and some parts added – including ten large Tesla batteries selected for their energy efficiency and high density.

The plan: While tearing apart and rebuilding the car, to consider how new manufacturing techniques and modern precision could be used for improvement. “We’re not trying to redesign a car,” said Budge. “We’re trying to make this existing car drive better.”

For a task that required details down to the millimeter, 3D scanning was needed. “A 3D model of a Land Rover chassis just didn’t exist,” Budge said. “And even if it did, it wouldn’t include all the dimensions and protrusions and things that get added during the manufacturing process.”

It was at this point that 3D scanning experts in Victoria were called in.

“Our Team at Thinglab were initially approached by Jaunt to see what options were available to create a digital model of one of their Land Rover chassis,” said Ben Myers from Artec’s Gold Certified Partner Thinglab. “Of course we jumped at the chance of being involved in this project and could quickly see that the requirements were calling out for the Artec Leo to be used.”

“For a project such as this, a massive amount of planning and design is required, with every line and curve considered, every arc or box section catered to,” explained Myers. “Fitting componentry, ensuring clearances and working out placement is always one of the challenges, and this requires accurate measurements and plans.”

A scanner like no other, Artec Leo allows accuracy of up to 0.1mm and has the most intuitive workflow with onboard processing and a built-in display. Used wirelessly, scanning with Artec Leo is as easy as taking a video on your mobile phone, while real-time display allows the user to quickly capture any areas they might have missed. This makes it a great solution for vehicles of all sorts and areas that are difficult to reach. 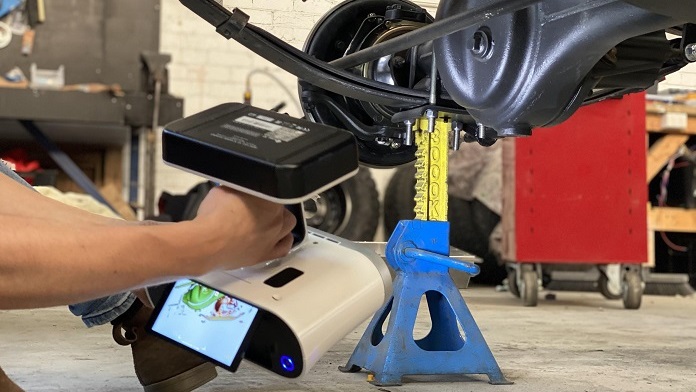 “There were a number of applications planned for the scan data, but the most crucial thing was to provide an accurate STL file which could be used in CAD,” Myers said. “This data could then be used to reverse engineer sections and provide a reference to design around.”

A color mesh file was also made which allowed for renders and image creation. With Artec Studio, a high-resolution color OBJ along with a heavily decimated file more manageable for CAD packages were easily produced.

“Scanning a chassis can be challenging as there are a lot of occlusions and in this case we needed a full model meaning scanning from multiple angles,” said Myers. “It was also quite low to the ground with not much clearance so we needed to utilize Leo’s inverted scanning and on-board display which helped, and saved a huge amount of time.”

Using the scanned chassis as a template of sorts, the Jaunt team can now work on a wide range of vehicles and expand their business further still.

“Leo let us scan this really quickly, and allowed us to have that resolution and that flexibility in the middle of our workshop,” said Budge. “We needed this to know that we could actually build our production vehicle.”\

With two cars successfully converted – the first was made for Mountain Ridge Winery who created a new wine in honor of their new car – more plans targeted at vacation destinations such as wineries, breweries and hotels are taking shape. “What we can do here is to create something that is inspiring and gets people excited about Electric Vehicles in a way that they never considered before,” Budge said.

And with more than 150 days of rental already booked in advance, and five more cars in the pipeline for early next year, Jaunt is just getting started with more scanning to be done yet. “While the basic platform was the same from 1958 to 2016,” Budge explained, “there are a lot of variants that we need to account for as we take up every square millimeter fitting batteries.”

“This is a great project that is exciting in the sense that it gives new life to an icon which is very well-loved,” said Myers. “It was also a great opportunity to showcase Leo and demonstrate how it can be utilized.”

Interested in learning more about 3D Scanning such as Artec Leo? Click here to view more Artec products or contact us and an expert from The SolidExperts will be happy to help.