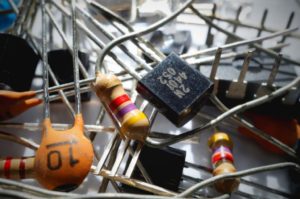 The maintenance of component libraries can be one of the greatest menaces of PCB design.  According to SiliconExpert, there are over 1 billion electrical components on the market.  Although there are numerous ways of obtaining components, each company must organize their components to fit their needs and workflow.

In Altium Designer, the default library provided in the tool is what Nine Dot Connects call a “symbol-centric” library.  In addition to the symbolic graphical representation of the component, it is also given a name, description, and parametric information.  Furthermore, other models may be attached, such as footprints, 3D, and SPICE simulation models.

This approach comes from Altium’s beginning when its founder, Nick Martin, wanted a tool for the makers, hobbyists, and small businesses.  For this market, the tool was designed for the single user.  However, as Altium grew in popularity, other library methods were needed to address the ability to share and collaborate.  We commonly refer to these types of libraries as centralized libraries.  Altium, Nine Dot Connects, and other third parties provide such solutions.

From a high-level view, a centralized library allows for several advantages:

However, symbol-centric libraries do not lend themselves to collaboration.  The libraries are simply files.  This requires team members to coordinate to keep the file up to date and consistent.  All too often, this effort falls by the wayside when projects need to be turned quickly.  Granted, if there is a single individual who plays the role of full-time librarian, the use of a symbol-centric library would be sufficient if it is well organized with a workflow that is established through programs, scripts, and communication channels outside of Altium Designer.

Click here to read about some nontrivial disadvantages of symbol-centric libraries as well as the different approaches to a database library.

Have more questions and want to talk to an expert?  Click here and an expert from The SolidExperts will be happy to help you.