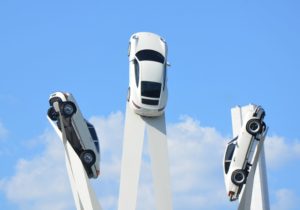 It’s hard to believe that flying cars aren’t just for Michael J. Fox anymore.  The future is coming…and flying cars will part of the scenery.  What was once a crazy notion for the silver screen is now a gear shift that’s merely moments away. What’s more, it might even be driving a greener future.

The theory behind a flying car is perhaps simpler than you might think. Imagine a drone crossbred with a Lexus and you’re not far off. From A-road to airborne in moments via a pair of gyrocopter-clad concealed wings that unfold at the push of a button and you’re on your flight-path home in minutes.

Okay, your local showroom is a few years shy of stocking the latest model. But VTOL (vertical take-off and landing) is a sound process based on solid technology. So how’s it earning its green reputation?

Research conducted by the University of Michigan looked at the various scenarios and fuel consumption of regular cars and their cloud-bound alternative. The results were a little surprising.

Assessing the environmental impact of flying cars, the study showed that for smaller journeys, the car wasn’t as energy efficient as its grounded cousin. But for longer trips of around 60 miles or more, the study showed that a VTOL vehicle had emissions at a whopping 52 percent lower than a petrol-powered car. Even electric cars didn’t come out favorably, themselves with 6 percent higher emissions than the VTOL cars.

Occupancy, however, is key to this statistic. The flying car would need to have a full complement to make it worthwhile. Also noteworthy is the fact that thanks to the excessive electrical power needed to propel the car to the skies, shorter journeys simply aren’t energy efficient. That lone commuter’s pipe dream? Sadly, still just that.

Nevertheless with enviable eco credentials, the pursuit of flying cars is a journey absolutely worth taking. A taxi-based service for multiple passengers could make longer journeys at a zippy 150mph. More miles covered in a tighter time frame, flying through the skies whilst making that very air less polluted as a result. It’s a goal for which several companies are striving.

This is the sort of venture that invites a smarter use of energy resources. More passengers traveling in direct flight paths (with shorter distances to the same destination) using renewable energy sources to power the vehicles. Over time, technology will be propelled forward by the financial allure of cheaper travel and the incentive of greener fuel consumption, passengers choosing to take flight instead of the rugged twist of the asphalt ground.

All we need now is a cure for altitude sickness.