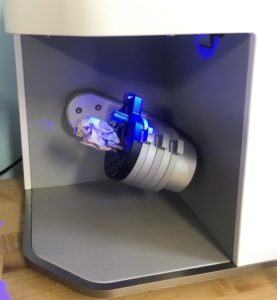 Going on a walk or a hike in search of “treasure” can be fun for a four-year-old or a 44-year-old.  You never know what you you might discover in the land around your home and neighborhood.  Not long ago, Artec Ambassador, Paul Motley of GoMeasure3D, was on a walk through the forest near his home in Amherst, Virginia when he discovered a gray squirrel skull on the ground.  Lifting it up and examining its 2.165 inches (55mm) of intricate, organic structures, he realized it’s a perfect opportunity to test the abilities of Artec Micro, a desktop 3D scanner for small objects, especially those with challenging geometries. The squirrel skull certainly qualifies as that. With its sweeping curves, thin ridges, and hair-like sutures, the skull is both beautiful and complex.

In the words of Paul Motley, “The reason I decided to scan this skull was because, the more that I thought about it, I realized that its geometries were very similar to those of many objects that need to be scanned in today’s industrial applications.” He continued, “For example, in the casting industry, where not only the casts themselves are being scanned, particularly in the case of reverse engineering legacy casts and dies no longer in production, but also for quality inspection of molds, casts, and the final products they’re being used to make. So many of those objects have thin edges, precisely-placed holes and angles, as well as organic or irregular shapes and surfaces. And speaking from a metrology point of view, if your 3D scan is even just a tiny bit off-the-mark, you’d be better off just throwing it out and starting over from scratch.”

Motley highlighted the case of auto parts makers with shelves full of small, legacy parts that need to be reverse engineered. “In the past, when we were digitally capturing objects like this, we used several scanners including the HDI series of 3D scanners, which scanned the object in 4 or more orientations via placing the object on a turntable. This gave us 95% coverage or more of each object. But to obtain such results, we needed at least 30 minutes of user input just to set things up for each different object, and that doesn’t include any of the post-processing needed after the scan.”

He continued, “With Micro, you cut your workflow down dramatically, both in terms of steps needed to capture all the complexity of your object, and the time involved. That’s tremendous, especially when you have a line of objects waiting to be scanned, and a deadline that’s drawing nearer. Not to mention that I can teach someone to use Micro in just a few minutes, and after that they’ll be getting pro results from their very first scans. For me, that’s a significant selling point, how it can capture an amazing amount of detail in color 3D without much more input than cooking something in a microwave.” 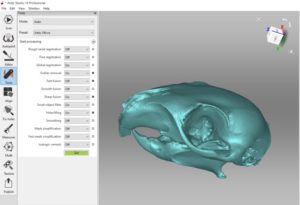 “Even though we chose to scan a skull for this test, we could’ve scanned virtually any small object and achieved the same results, whether that means aerospace parts, dies and casts, jewelry, archaeological objects, tiny gears, components – you name it. And with the degree of resolution Micro gives you, you’re guaranteed to see any defects or irregularities present in the original object. In terms of metrology, Micro gives you precise measurements that will satisfy even the tightest of specs,” said Motley.

Click here to read more about the amazing results achieved with Artec Micro.

Wondering how Artec 3D scanners can help you and your company succeed?  Click here and an expert from The SolidExperts will be happy to help.